Vanessa Choo is four years old. She lives in Singapore.

the boy
and the lamb

hidden behind
the blue tarpaulin

a world that is their own

the sea
reflects
the sky
grasps
the second full moon

a ladder leans against
the blue cottage

a china tea set is blue
untouched
the kettle whistles

they hide
out of reach of truth
behind reality

where the ice met the sea – Lucy Jessep

between the frost
and the sea
a figure stood

half crystallised frost,
formed from a single breath
on a moonlit day

she would climb onto a sleigh
pulled by deep blue horses

and ride towards the moon.

she wondered what
the sea would look
like if it froze

sheets of ice
stretched tightly
over the ocean
like a glass cover,

the ocean whipping it,
forming spider-web cracks
in a frozen wasteland

I’m the chief scientist on an exploration class starship, and I’m also a robot. Or at least I’m pretending to be.

Robots speak in a steady, measured cadence, because there are no emotions to distract them. I keep my voice neutral as I impart life-saving information to the crew.

When I get home there’s a note on the door. I’m going to live with my sister, it says. The children are coming with me.

I go inside and open the newspaper, because I haven’t read it yet.

twenty stars tingle
on each of my
fingers and toes

an owl hoots
from my other wrist

I collect
memories of the night too,
you know.

I’m floating in an infinite world
High over the earth so beautiful and blue
I can see the stars and they look like glitter spread over the sky
I’m in a sea of tranquillity.

I see them
I don’t hear.
Muffled voices collecting in a haze
their timbre is dead, monotonous
a dull globe of noise, thudding
Indistinguishable sound pollution
I am in the center
but no one acknowledges me
my life goes on, long walks in the park
I see no colour
except
blue.
I see sadness, I see being alone.
But it is only me in my loneliness
The blue is others’ happiness through a filter
that is my eyes
They are normal, I am the odd one out
I look in the mirror
And I see blue
My blood runs cold, always
There is a sinking sphere
Lead in my chest
It pulls me down, so that everyone else
Is above me
Superior
They laugh, but not at me
They are looking elsewhere, happy
They do not notice my pain
They do not notice me
Their lives are fulfilled
I am invisible
I am the one who sees blue
Blue is all I see
Everything is blue
I’m drowning
I’m seeing my whole life before my eyes
My life has always been blue
I was born and put in baby blue
When I wanted pink
When they laughed, at me, this time
I saw everything through ocean eyes
Cried cerulean tears
Now
I’m falling down, the bridge called to me
I watch the shimmering surface of the waves, undulating
The lead where my heart is, pulling me under
Drifting to meet the sea floor
A cold bed
But I’m not seeing blue anymore
I see purple
Now red
My blood is being drawn from my lungs before me
And now I see black 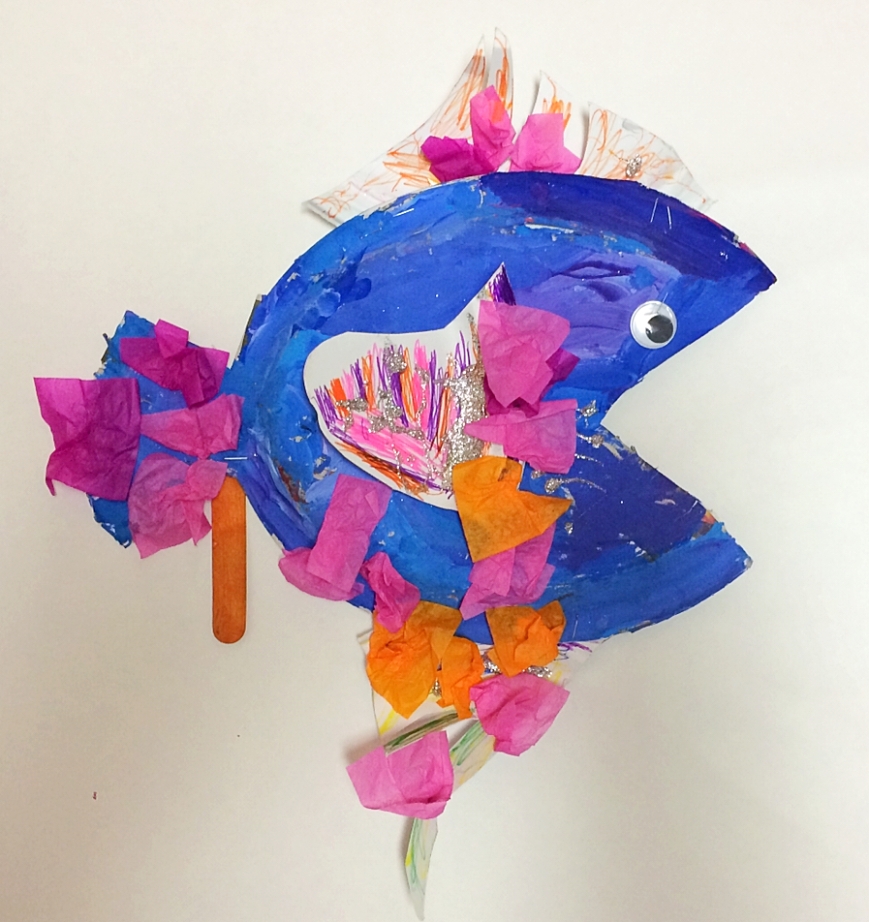 Alanah Peters is seven years old, and created this artwork at the age of six. She lives in Bluff City, Tennessee, United States.

She swooped down onto the crescent shaped rock, her brown, wrinkled, webbed feet planting on the granite, made smooth by decades of swift currents. She lowered her head delicately, and came back up with a beak full of crystal clear water, leaving behind a pulsating ripple. She straightened her neck, droplets falling from the end of her beak, and shook her feathers. This was her favourite spot, far enough away to not be disturbed by her brothers, let alone those tall creatures with big shiny machines, always making noise.

She was majestic, candy for the eye, nature’s finest. Her feathers were of a glorious array of blue and green that stood out perfectly against the background. Her soft furry underbelly was snow white, peppered with dots of cherry. Her feet were so intricately designed, with seemingly hundreds of layers and textures. She rubbed the top of her head on her underbelly, trying to sooth the irritated skin around her deep scar. It was engrained in her memory.

After cleaning herself, she took off in search of her brothers. Surely they had found a tasty morsel to gobble, or else she would go starving. Her wings flapped in a monotonous beat as she soared through the air, with a bird’s eye view of the snaking, blue and white river, cutting through the land. Then she saw it. Something out of the corner of the eye, out of focus, but there. She turned her head as she saw the tall creatures, holding long shafts, looking up at the sky. She turned her gaze back to the river, confused. The next moment, she heard a loud BANG and her feathers parted, as the hot sharp object tore through her skin and pierced her heart. She dropped like a stone, and splashed hard down into the water.

The blue duck sank to the river floor, one of the last of its kind, taken for granted. A waste. The charm of her blue enigma was lost for good. The hypocrisy of mankind.

I look down at my beef. Cold. Blue. I look up at my daddy. Cold. Blue. His coldness is driven by an eternal storm of violence, but no one else sees it. Coldness of the beef is driven by a lazy cook. I wonder if the cook has a storm as well, and pray he doesn’t. It’s a shame my few spots of sunshine can barely hold up the rain my daddy hails down on me. Cold. Blue. It’s a shame my bruises always show up blue against my pale skin, so I yet again come up with excuses as to why my pale flesh is constantly interrupted by fields of damaged nerves that insist on sharing my secret. Daddy’s little secret, he says while tapping the side of his nose, the same nose that constantly drips little bundles of snot. Cold. Blue.

My beef is gone, and I like it that way.

The coffins fall from the clouded sky
Jump, or burn, jump or burn!
Pale arms, reaching for the surface
Legs still, hearts still

The coffins fall from the other side
No longer stars and stripes
Jump, or burn, jump or burn!
Tanned arms, reaching for the surface
Legs still, hearts still

Blue cares not for colour
For it encompasses all

Eleanor Bennet is nineteen years old. She lives in England.

The butterfly flapped its wings,
Sending shockwaves through the air.
She exhaled,
Her blue breath clouding the sky,
Swirling like an icy dragon.
The dragon cried,
Shaking the air with its new-found powers.

Another flap of the butterfly’s wings,
And the dragon’s inferno was extinguished.
Forming from the smoke,
A tree grew.
A tree
As wise as the owl that perched on
The branches of navy.
Strong and sturdy,
Caring for the dragon infants
That rested on it.

The butterfly stopped flapping its wings
And a dire axe appeared.
Without any hesitation,
It slammed into the trunk of the tree.
Down and down, it
Fell.
It was silent.
No more breath.

I Start at Blue – Georgina Scott 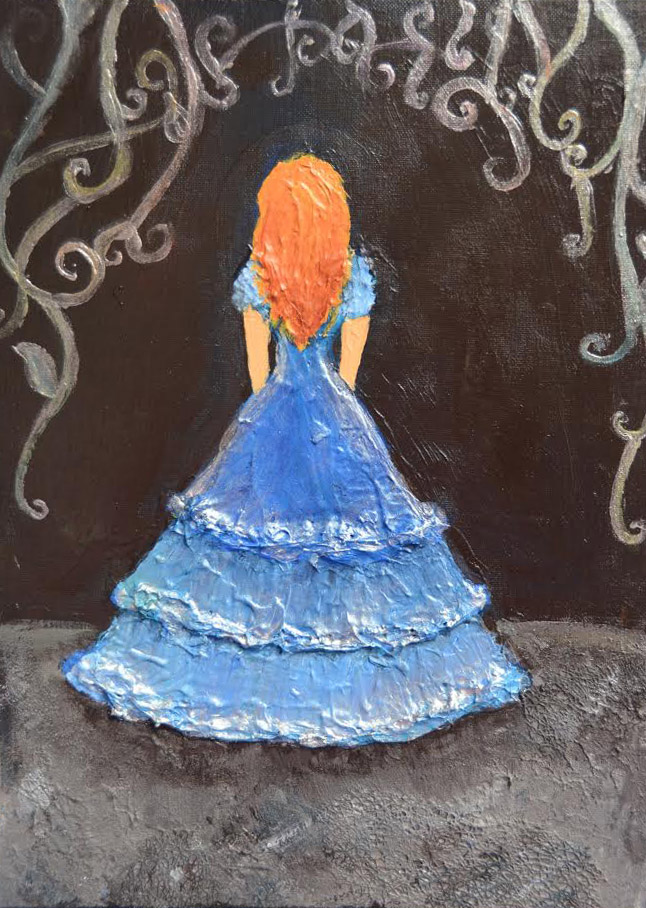 They waddle cutely
across the ice
Their bodies slide too.

Jeannie Hird is nine years old. She lives in Wanganui, New Zealand. She is the first person ever to submit to fingers comma toes.